The English Prize. The Capture of the Westmorland. An Episode of the Grand Tour. An exhibition at the Ashmolean Museum (17 May - 27 August 2012)

Exhibition Review: The English Prize. The Capture of the Westmorland. An Episode of the Grand Tour. An exhibition at the Ashmolean Museum (17 May - 27 August 2012).

The Westmorland, an armed merchant ship, was captured in 1779 by two French warships, mid-voyage from Livorno to London, and taken to Malaga. This ‘English Prize’ was carrying a cargo which included Parmesan cheese, olive oil, and ninety crates of antiquities and works of art, bought in Italy by British Grand Tourists, artists and dealers. Many of the books, prints, paintings and artefacts were acquired by King Carlos III for the Spanish royal collection and the Royal Academy in Madrid. They are reunited in this exhibition as a fascinating time capsule of the Grand Tour. A painstaking international research project has enabled the identification of many of the individual crates’ owners, and the contents reveal their purchasers’ particular preoccupations. The exhibition cleverly highlighted this appealing individual dimension, whilst successfully drawing out how the cargo as a whole represents a snapshot of late-eighteenth-century Grand Tour collecting. It is perfectly placed within the wider context of the Ashmolean Museum, which has Britain’s only permanent gallery devoted to the Grand Tour.

The exhibition began with a general introduction to the Grand Tour, undertaken by wealthy young men to complete their education. Classically educated tourists sought out Greek and Roman remains, and purchased souvenirs, which would testify to their education and taste back home. Within the main space, visitors first learnt the story of the Westmorland, her cargo and its capture. The first of the individual tourists – John Henderson – was featured here, with a focus on his unsuccessful attempts to recover his lost possessions. The curators have done a good job of picking out personal touches which give visitors a sense of closeness to these travelers as people, such as the menu and cost of a dinner in France scribbled onto one of Henderson’s books. We also see a letter from his intermediary describing ‘a Portrait he joys which he wishes much to have’, displayed alongside the painting in question of a mystery young man; we are left to speculate why Henderson was so attached to this portrait. The fact that these travelers never got the chance to enjoy any of these possessions in their intended domestic setting adds poignancy to the experience of visiting the exhibition, and brings home the dangers of travel in the period – for the objects, and also for the tourists.

The second room focused on three more individuals: Francis Basset (later first Baron of Dunstanville), Frederick Ponsonby (Viscount Duncannon) and George Legge (Viscount Lewisham). The exhibition sought to draw out both what their objects reveal about them individually, and as a microcosm of the Grand Tour: while there are individual idiosyncrasies of taste and preference, overall their purchases are remarkably similar. Particularly striking are the portraits of Basset and Lewisham by the fashionable painter Pompeo Batoni, both showing the sitter posed with classical antiquities and holding a map of Rome or Italy, signs marking them as well-traveled, cultured intellectuals. There were forty volumes of Piranesi’s etchings of Rome and its antiquities in the Westmorland’s cargo, and two displayed here, views of a marble tripod, bear dedications to Basset and his tutor Sandys - marks of respect for a favoured client, and a probable long-standing acquaintance, respectively. Such signs of the relationships between the tourists and tutors, guides, artists, agents and dealers are omnipresent. These were the men who shaped their experience of Italy and guided them to purchase souvenir volumes, paintings, prints and artefacts. 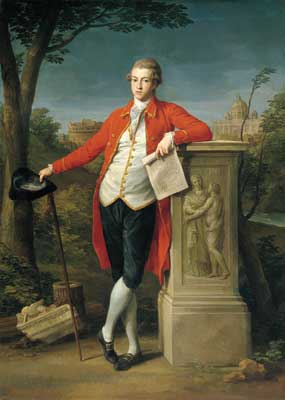 A series of six beautifully fresh watercolour landscapes of the Alban Hills by John Robert Cozens, purchased by Basset, stood out as unusual in this room. These were probably intended to decorate Basset’s library at Tehidy Park in Cornwall (Sloan 2012: 124). The private and practical elements of the cargo are as fascinating as the objects destined for prominent display back home. Duncannon’s crates contained dictionaries, guidebooks and maps, evidencing travel through France and Switzerland, as well as souvenir fans, perhaps gifts for his fiancée, and one hundred and twenty musical scores. Only one of these, a set of Haydn’s quartets, has been identified in the Royal Academy collection – from his tutor Samuel Wells Thomson’s signature upon it. Whether the music was owned by Duncannon or his tutor, it allows us a glimpse of the travelers’ leisure activities. It is also enlightening to see the type of objects acquired by those with modest budgets, in contrast with the famous collections heavy in sculptures and paintings more often seen in museums and country houses. Lewisham’s crates contained books, maps, engravings, and Vesuvian lava samples along with copies of two eighteenth-century Italian masterpieces.

The final room highlighted the popularity of copies, of both paintings and sculpture, and gave a clear impression of the craze for antique elements in country and town house interiors of the time. Sculptural works on display included groups of Bacchus and Ariadne and of Cupid and Psyche, upon decorative pedestals, and versions of the heads of Medici Venus and Dionysus, en route to the Duke of Gloucester, the younger brother of George III. The renowned antiquarian Lyde Browne was transporting four small-scale copies of classical statues, including a Minerva displayed here, and there are also decorative candelabra, cineraria, and a reworked portrait of Antoninus Pius. Often only the original Greek and Roman pieces are given weight by museum curators and cataloguers (Coltman 2009), and such copies and fantasy variations are consigned to storage, or displayed as purely decorative objects with little or no interpretation. This exhibition offered a rare chance for them to be appreciated in their appropriate context as part of the typical Grand Tour collection of the late eighteenth century. By this time stricter export controls were limiting the number of genuine antiquities available to British collectors, and demand far outstripped supply. The only unadulterated antiquities on board the Westmorland were two small sculptures of fauns excavated at Genzano and destined for Charles Townley, one of the most celebrated collectors of the period. He never recovered them and their fate is unknown (Bignamini & Hornsby 2010: 88-90; Yarker & Hornsby 2012: 72-3).

For me, a particularly interesting aspect of the exhibition was the detective work that enabled researchers to piece together the history of the Westmorland and its cargo. Once absorbed into various Spanish museum collections, the objects’ provenance had been forgotten. The final room conveyed a very immediate sense of research in progress and the excitement of academic discovery, featuring not only the initial spark of the project but also the most recent breakthrough: the three antique style cineraria displayed here were some of the objects which first sparked investigation; visitors also learn the story of a collection of saint’s relics which were the only item from the Westmorland to make it to Britain, and were identified at Wardour Castle just before the exhibition catalogue went to press. Elsewhere in the exhibition, attention was drawn to the initials ‘PY’ marked on books and other objects, which enabled items belonging to the cargo to be traced in Madrid’s Royal Academy collection, once it was realised that the letters stood for ‘Presa Ynglesa’, the ‘English Prize’. Crates were inventoried by initials, and another breakthrough came with the realisation that these referred to their individual owners. Many of these owners have been identified via bookplates or annotations, but some remain a mystery, conveying the thrill of continuing research and discoveries still to be made.

A substantial catalogue (Sánchez-Jáuregui & Wilcox 2012), a series of events, and a ‘Grand Tour Trail’ around the rest of the museum all accompanied the exhibition, which was organised with the Yale Center for British Art, New Haven, and the Paul Mellon Centre for Studies in British Art, London, in association with the Real Academia de Bellas Artes de San Fernando, Madrid. It will also be shown at Yale, 4 October 2012 – 13 January 2013.

Coltman, V 2009 Classical sculpture and the culture of collecting in Britain since 1760. Oxford: Oxford University Press.

Sánchez-Jáuregui, M D and Wilcox, S (eds) 2012 The English Prize: the Capture of the Westmorland, an Episode of the Grand Tour. New Haven and London: Yale University Press.

Sloan, K 2012 “Surpassing the Others in Prospect and Situation”: Six Watercolors by John Robert Cozens. In Sánchez-Jáuregui M D and Wilcox S (eds). The English Prize: the Capture of the Westmorland, an Episode of the Grand Tour. New Haven and London: Yale University Press, 115-125.

Yarker, J and Hornsby, C 2012 Buying art in Rome in the 1770s. In Sánchez-Jáuregui M D and Wilcox S (eds). The English Prize: the Capture of the Westmorland, an Episode of the Grand Tour. New Haven and London: Yale University Press, 63-87.