Since opening in 2007 The Wellcome Collection in London has hosted a series of exhibitions that seek to challenge and assert the relationship between medicine, life and art. This overarching pursuit reflects the original vision of Sir Henry Wellcome (1853-1936), who amassed a vast cross cultural collection of objects, books and paintings related to medicine and health through the ages. A small part of this collection is displayed in Medicine Man, one of two permanent exhibitions housed within the original Wellcome Building, built to Sir Henry's specifications in 1932. The second permanent display, Medicine Now, explores the development of science and medicine since 1936, and incorporates artistic responses to key issues including the body, genomes and obesity.

Complementing these core themes has been a diverse series of temporary exhibitions. From dream states to crystallography, anatomical models to mind altering drugs, The Wellcome Collection has innovatively presented what can best be described as 'ideas' exhibitions, drawing together historic artefacts and artistic works to creatively interrogate varied cultural responses to the medical world. Their most recent exhibition continued this imaginative approach with a topic never far from the mind of the archaeologist: dirt. 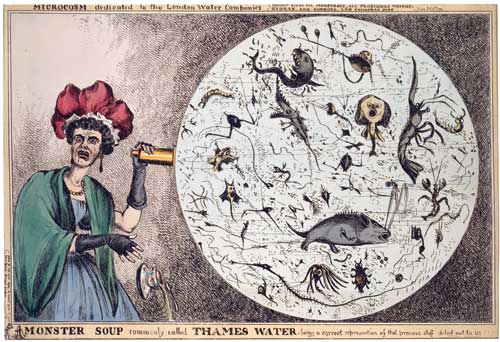 Dirt: The Filthy Reality of Everyday Life tackled an ostensibly endless subject via six specific localities and six respective themes: Delft (The Home), London (The Street), Glasgow (The Hospital), Dresden (The Museum), New Delhi and Kolkata (The Community), and Staten Island (The Land). Broadly chronological, the exhibition began in 1683, the year Antonie van Leeuwenhoek wrote to the Royal Society to inform them of the 'little animals' he had observed in scrapings of 'batter' from his own teeth. The microbial world he discovered during 'enthusiastic investigations' of 'insects, blood, bones, sweat and rainwater' helped introduce the overarching framework of the exhibition, namely, the ongoing dialogue between dirt as an invisible threat to our wellbeing, and dirt as the visible and unwelcome remnant of human existence, whether biological or material. This relationship between the visible and the invisible, the public and the hidden, underscored the central theme of perception running throughout the exhibition, with large opening text claiming that: 'There is no such thing as absolute dirt: it exists in the eye of the beholder' (Douglas 1966: 2).

In the exhibition design the visitor's interpretation of filth was challenged from the outset. Hanging directly in the path of anyone entering the space was a window cast from dirt, by artist James Croak. The abrupt visceral impact of this sculpture, thick and brown with accumulated dust and dirt, unsettled our usual response to a window. Something designed to bring light into our homes, or provide a visible link to the outside world, was here blocking the way, immediately forcing us to reconsider the status of dirt in our daily existence. Following this sensorial shock the exhibition took a more traditional approach to display, although always with a view to destabilising visitors' preconceived notions of dirt and its history. Using maps, objects, paintings, videos, books and photographs, each of the above locations was shown to have a particular relationship to dirt, a subject of universal significance but always dealt with via culturally specific responses. The exhibition invited the visitor to delve, like the archaeologist, into the detritus of each locality, sifting through the gathered cultural grime to reframe its history in filth. In 19th Century London the focus turned to the impact of cholera on the deprived population of the metropolis. Originally believed to spread through bad air, or 'miasma', physician John Snow undertook extensive research in the area around Broad Street in Soho to show that cholera was in fact spread through polluted water. His map, with its methodical recording of each death as a black rectangle, represents not just a turning point in our understanding of disease, but also in the visual expression of scientific concerns. Placed within a museum, the map can thus be viewed as much as a work of art as a valuable artefact of medical history.

This artistic undercurrent to the exhibition was ever-present, becoming explicit in the sculptures and commissions interlaced throughout the display. Santiago Serra's 5 Anthropometric Modules made from Human Faeces by the People of Sulabh International, India rested like giant megaliths on the exhibition floor, the kind of enigmatic monuments that archaeologists could study for generations, were their original meaning somehow lost. The fact that they are made entirely from shit merely provokes a strange fascination, not disgust, particularly when viewed in relation to Senthil Kumaran's 2007 photographs hung nearby depicting scavengers in the latrines of New Delhi and Kolkata. In contrast to the impersonal sculptures these images triggered an immediate reaction. So easily passed by in the exhibition narrative, they were among the most disturbing pieces on show, presenting contemporary manifestations of an existence many would have considered consigned to history. Yet, as the exhibition text informed visitors, recent figures indicate that over one million people in India still clear human waste by hand from dry toilets for a living.

The lack of odour emanating from either these images or the sculpture highlighted one of the fundamental problems of an exhibition of this type. Dirt is a multisensory experience, and the focus on the visual in the traditional museum space negates the very real power of other physical interactions, particularly smell. This is not to suggest that a 'scratch and sniff' approach would have aided the story of dirt, but to fully comprehend the multitude of perceptions to a subject as wide ranging as this, one must begin to explore beyond the 'eye' of the beholder.

What of the archaeological perception of dirt? That the job of the archaeologist is a dirty one is almost intrinsic to the discipline. The popular image of the archaeologist is of a dirt splattered individual waist-high in a trench scratching at the surface of the earth for the morsels hidden within. Once excavated, these artefacts are methodically washed and sorted - given value by their new found cleanliness. One could even argue that it is the role of the archaeologist to transform the dirty, through a process of sanitisation and knowledge creation, into culture - although of course dirt left on an object can also provide a very powerful association with authenticity and antiquity - hence the 'distressing' of forgeries and replicas.

In recognition of the close relationship between dirt and archaeology, The Wellcome Collection hosted a day of events on the hidden history of London. 'Dirty Old Town' included a walk along the foreshore of the Thames and a family workshop explaining how the ancient life of the city might be explored through its material remnants. The popularity of such events highlights the ambiguity felt towards dirt and discarded objects. Left long enough, the most mundane unwanted items can become fascinating and prized indicators of past lives.

While this process is most apparent in the unearthing of objects from prehistory or antiquity, since the 1970s work such as the Tucson Garbage Project has drawn attention to the effectiveness of utilising archaeological methods to investigate recent past, or even present, lives (Rathje and Murphy 1992). Such projects serve to highlight the unavoidable truth that 'all archaeologists root around in the remnants and offal of the past' (Shanks et al. 2004: 65). Perhaps it should therefore not have been surprising that the most explicitly archaeological section of Dirt examined the Fresh Kills landfill on Staten Island, New York, once the world's largest municipal dump receiving around 29,000 tonnes of rubbish a day. Alongside the traditional material of the archaeologist (including Native American artefacts from the site) the exhibition asked visitors to question the relationship between human beings and their waste through a series of artworks undertaken by Mierle Laderman Ukeles, artist in residence for the New York Department of Sanitation since 1977. Her most recent project seeks to collect, record and display items donated by members of the public, important objects carefully chosen rather than absent-mindedly discarded, adding them to the site to 'definitively transform the meaning of this land by creating a continuous counter-layer 'kissing the surface' of valued, preserved, individual offerings' (Forde 2011: 3). By combining the treasured and the discarded, the dirty and the clean, Ukeles adds to and reformulates what Robert Nagle, in the exhibition catalogue, refers to as the 'immense, inadvertent museum' of Fresh Kills (2011: 198). Landfills are among the most inescapable and visible reminders of our dirt filled lives, but even at their most miniscule the things we sweep away, scrub off, wipe clean and generally attempt to eradicate can inadvertently provide a lasting repository of human activity. Even if 99% of archaeological material starts out as 'worthless dregs' (Shanks et al. 2004: 65), it is the archaeologists responsibility to recognise the potential value of this human detritus.

The Wellcome Collection exhibition undoubtedly achieved its aim of reframing my own perception of dirt - to the extent that during return visits I was almost disappointed to find that over the course of its run the displays had been cleaned. If the grime of visitors and the city outside had been left to collect, gradually layering the pristine white space of the museum, the narrative and tactics of the exhibition might have been made all the more powerful. A conservationist's nightmare perhaps, but in this way we might begin to fully understand the impossibility of avoiding dirt, and how the biological and material matter we leave behind in our daily lives, whether purposefully or by accident, is as much a part of our cultural make-up as the cleanliness to which we aspire.

Douglas, M 1966 Purity and Danger: An Analysis of Concept of Pollution and Taboo. London and New York: Routledge.