Editorial: PIA at 21 and the Human Remains Crisis

PIA at 21 and the Human Remains Crisis

This issue of PIA is published on the brink of the Institute of Archaeology's 75th Anniversary. To celebrate that milestone, as well as the journal's coming of age and entry into a third decade, I am very happy to present the journal in rather splendid new clothes. For the first time, PIA will be printed in full colour, and has also been updated with new layouts, typefaces, jacket design and logo. I very much hope that the rejuvenated PIA will continue to develop and grow for many more years to come. As in previous years, all content remains free to download from our website, and we hope you will make use of our online facilities to continue to engage with and share the wide range of topics contained here.

Our forum topic this year is concerned with what our lead article authors (Mike Parker Pearson, Tim Schadla-Hall and Gabe Moshenska) call 'the human remains crisis in British archaeology', a subject which has drawn diverse responses from a number of extremely well informed commentators, all of whom have in some way been active in this debate.

Not everyone we contacted was willing to address all points raised by the lead article, and some were not willing to contribute at all. Particularly noticeable is the reluctance of the great institutions of Church and State to engage meaningfully in this conversation. This is a shame. It is left to a group (The Council of British Druid Orders) and their representative (King Arthur Pendragon) - an individual who many would normally consider to be outside the realm of mainstream public and academic debate - to provide the sort of thoughtful and provocative counter-argument that we might expect from our public servants and traditional spiritual guardians. Alas it would seem - despite Sayer's hopes for a wide ranging cultural dialogue - that the lords spiritual have other things than archaeology on their minds.[1]

This reluctance is perhaps understandable given the nature of the issues involved, particularly those arising from confusion in the way that terms like 'aborigine' and 'ancestor' are used by different sides in the debate (compare Pitts and Pendragon). It is, of course, entirely proper to raise concerns about any claims to culture that depend on spurious ideas of 'blut und boden' - the very word 'indigenous', especially when applied to the unequivocally heterogeneous British, will always bring to mind the absurd autochthonic fantasies of the deluded far-right. Yet it is important to ensure that we are even-handed in the way we problematise these claims: it is simply not intellectually justifiable to scoff at home-grown spiritual responses to the past whilst at the same time accommodating similar ideas in other cultural contexts. The modern, western, mentality undoubtedly finds it easier to accept and negotiate with 'irrational' spiritual attitudes to landscape and memory in societies it sees as less sophisticated than its own - this is patronising, and perhaps yet another symptom of the colonial hangover.

King Arthur presents some thoughtful arguments which, even if archaeologists may find it hard to agree (at least in a professional capacity), should at least provoke some reflection. If we fail to think beyond the concerns of our discipline we are - as Duncan Sayer rightly points out - in grave danger of diving down a rationalist narrow cul-de-sac where the public - and all others with different cultural values - will be unable and unwilling to follow us. In this sense, Sayer's observation that "the Pagan presence as an interested party in this dialogue has actively galvanised the archaeological community" (p.8) points to more than a simple knee-jerk protectionism from the archaeological community in response to a perceived threat, but acknowledges that Pagan intervention may actually be the catalyst for more profound engagement and dialogue with others of all beliefs and backgrounds - with potential benefits for all. Indeed, I would argue that for a profession that aspires to know the minds of the ancients, the ability to show sensitivity and understanding towards other belief systems is a valuable intellectual asset - particularly given the limits to scientific knowledge that Mike Pitts lays bare.

Minna Lapinoja provides inspiring examples of how this sort of dialogue can lead to positive action, greater understanding, and fruitful collaboration with different communities; different views don't always have to lead to confrontation. Of course, this also means that the same willingness for dialogue should be extended to the archaeological community by others in positions of greater institutional authority. Lapinoja's eminently reasonable suggestion is that, in "making decisions and changes to the legislation that affects the archaeological community deeply, the MoJ should also consult archaeologists and be able to offer explanation and discussion of its reasonings" (p.14). As Philip Ansell's contribution to the debate demonstrates, the Ministry of Justice is not willing to offer either of these. Nothing could provide a better illustration of what Moshenska, Parker-Pearson and Schadla-Hall describe as "official indifference" (p.5).

That open discourse and inter-disciplinarity - at least within the humanities and social sciences - can help us to get a better glimpse of how people in the past may have negotiated their world is reinforced by Dr Mike Bintley's paper on the bowls from the Sutton Hoo ship burial (and as a burial, Sutton Hoo is particularly puzzling; the absence of a body confounds all expectations). Bintley's paper, addressing an archaeological problem from the perspective of a related discipline, demonstrates how much can be gained from imaginative and holistic approaches to the evidence of the past and help us, if not to read the minds of the ancients, at least to reconstruct an informed idea of the imaginative environment in which their thoughts were moulded. Lesley Acton's paper on the history of the Allotment movement similarly makes the point that the way people manipulate identity is a complex historical process, constantly renegotiating the relationship of the individual with society, place, activity and artefact.

Edwinus Lyaya's paper bridges the gaps that sometimes exist between archaeology practised as a science and the interpretation of how people in the past related to an unseen world. His rigorous research into the biological components found in Tanzanian iron slag deposits also draws on wider cultural traditions to provide an insight into the links between science and magic in East Africa, and emphasises the conceptual relationship between iron production and child birth. Di Hu's paper is an explicit attempt to place the application of an abstract technical tool of archaeology - Geographical Information Systems - within the creation of theoretical approaches to the past. Her conclusion, that people - not systems - create the means of understanding the world, emphasises the fact that we as archaeologists inescapably invest our own humanity into our research, no matter how scientific our methods.

We are also very pleased to have a short paper from the Institute's own Professor Tony Waldron. Not only does this paper sit very happily with the subject of this issue's forum, demonstrating how collections deemed unusable may well have much still to reveal, it also presents a totally fresh approach to understanding unknown human remains. We hope - as does Professor Waldron - that readers will respond to this paper with their comments and suggestions for the applicability of his method. Finally, we are able to bring you the latest instalment of the extraordinary excavations at Carricacou in the Caribbean. These reports have been a feature of several previous issues of PIA, and this year's report brings further remarkable finds as well as a snapshot of exemplary community engagement and outreach.

Finally, we are also delighted to present several substantial reviews, including of the Welcome Collection's 'DIRT' exhibition (Colin Stirling), the interdisciplinary conference 'Beasts in the Anglo-Saxon World' (Melissa Herman) organised at the IoA by the editor and the volume's contributor Mike Bintley, as well as book reviews of Donald Makreth's Brooches in Late Iron Age and Roman Britain by Michelle Statton, The Oxford Handbook of Cuneiform Culture (edited by Karen Radner and Eleanor Robson) by Alice Hunt, The Oxford Handbook of Ancient Anatolia (edited by Sharon R. Steadman and Gregory McMahon) by Veysel Apaydin, and Pictish Progress (edited by Edited by Stephen T. Driscoll, Jane Geddes and Mark A. Hall) by the editor.

For all that the papers contained here share with each other, they also highlight one striking aspect of current archaeological research: an extraordinary diversity in temporal and geographical scope and the methods applied by researchers. In this single volume, we have papers which range in time from the present (Acton) to the ancient (Kaye et al.), and in approach from the literary (Bintley) to the statistical (Waldron), from information science (Hu) to metallurgy (Lyaya). We travel from East Anglia to East Africa and on into the realms of the purely abstract. There now exists an almost bewildering array of sub-specialisms and theoretical approaches that fall under the umbrella term 'archaeology'. It is an observation that prompts one to question whether archaeology is still a useful concept for such a multiplicity of approaches to the past, a question which also raises issues about the degree to which - if at all - archaeology can and should remain distinct from related disciplines.

In anticipation of the 75th Anniversary of the Institute's inception, I went rummaging in the archives for documents that might shed some light on how the original mission of the IoA was conceived. Though much of what I found related to the deeply prosaic ('cracks in the fabric' of St John's Lodge for example), the document reproduced here (see figure 1 below) and those of a similar date reflect no qualms about the unity of the discipline or its future. Despite the severe misgivings of others in the archaeological world of the time (as the separate letters from Professors Ellis Mimms and Miles Burkitt (Cambridge) to Tessa Wheeler make plain), the Institute was evidently conceived in a spirit of lofty ambition and great optimism. Whether - 75 years on - the Institute still has pretensions to leading "the co-ordination of research in archaeology throughout the kingdom" and, indeed, whether archaeology itself can still be considered as straightforward a science as the Wheelers and their contemporaries believed it to be, is unclear. The quality and diversity of papers published here, however, would suggest that both archaeology and the Institute remain in rude health. 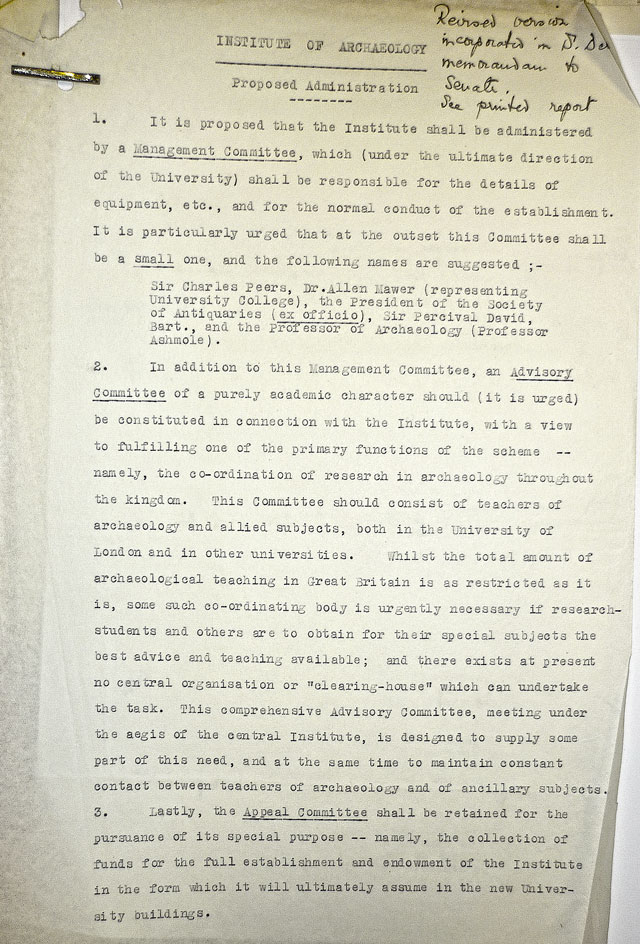